Costume SuperCenter has the Jurassic World Fallen Kingdom Kids Inflatable Velociraptor Costume for only $49.59 after a price drop from $61.99. You save 20% off the retail price for this kids inflatable Halloween costume when you use the coupon code JOY at checkout. Add extra for shipping or receive free shipping over $75. We could not find a better price for this costume online. The Jurassic World Fallen Kingdom Kids Inflatable Raptor Costume includes the full-body inflatable suit and battery operated fan. Sales tax is charged in most states. Deal may expire soon. 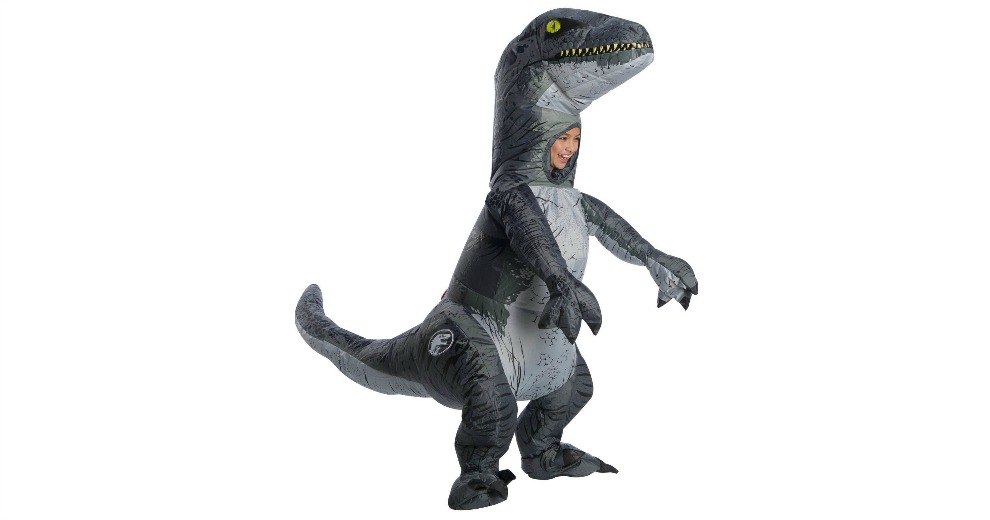 Does your child want a costume that is cool, exciting and will never go out of style? Or maybe they are so excited for the new Jurassic World movie that they must have the next biggest dinosaur costume. Luckily, there is a costume that will bring both fun and a little bit of fear into your next Halloween. Beware of where you wear this fun and realistic Jurassic World: Fallen Kingdom Kids Inflatable Raptor Costume because you never know if Owen Grady might show up and mistake your child for one of the missing raptors. Everyone remembers when the first inflatable T Rex costumes made their way onto social media. So just think, your child will have a costume that they love from their favorite movie and might even become famous on social media or YouTube! This costume I s win win all around and with a built in battery back, it does not take much for this prehistoric creature to come to life. Nobody likes a boring costume after all and why deny the fun you can have with your child as giant Velociraptor? We know that these creatures can be extremely scary because they made appearances in all three Jurassic Park movies and Owen Grady trained some of them in the first Jurassic World! don't let their fearsome nature bring you down this Halloween, you can always bring life to the party with a fun and inflatable costume such as the Jurassic World: Fallen Kingdom Kids Inflatable Raptor Costume.