Right now at Walmart, you can get the Marvel Black Panther Movie Adult Deluxe Shuri Costume for only $39 (reg. $54.99). You save 29% off the retail price for this women’s Halloween costume. Plus, this item ships free. This is the lowest price we could find online by about $5. The Shuri Black Panther Costume includes the top, pants with shoe covers, 2 armbands, and molded knuckle busters. Sales tax is charged in most states. Deal may expire soon. 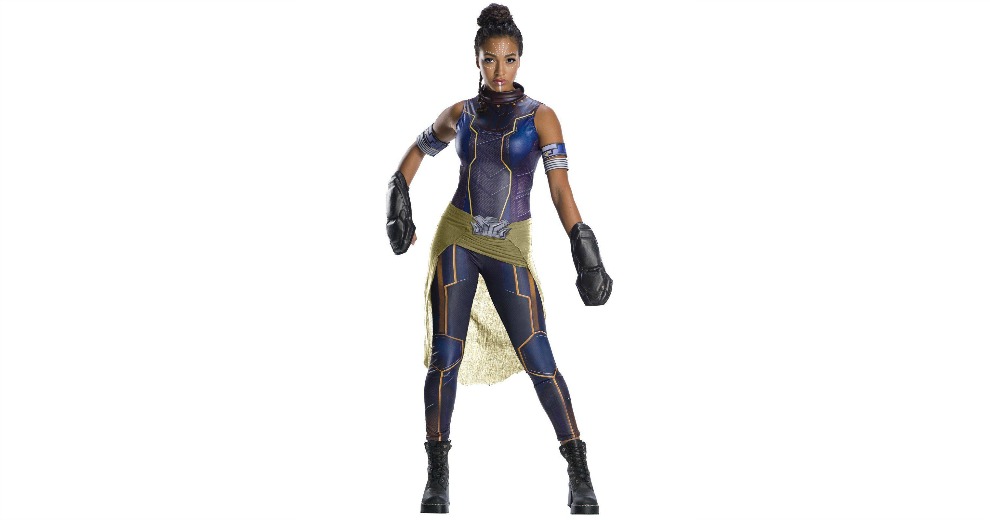 There is no Black Panther without his sister, Shuri. Wear this Marvel: Black Panther Movie Women's Deluxe Shuri Costume so you can play a vital part in the story! She is just a teenager but happens to be the brightest in the country and develops much of their highly advanced equipment. In fact, she may prove to be such an engineering superstar the likes of Tony Stark would certainly pale in comparison. Shuri makes her Marvel Cinematic Universe debut in Black Panther. She is the princess of Wakanda and her brother's guide for much of her inventions. However, when the country is threatened, she jumps right into action to defend her home. This outfit is modeled after what is worn during the film's huge battle. You receive a top with attached skirting featuring printed details along the surface. The collar slightly pulls up to the chin to offer some extra protection. A pair of pants has matching designs and boot tops to cover your footwear. Two arm bands are included which offer some slight accessorization to the ensemble. It also comes her weapon of choice, molded Knuckle Busters, which emit some highly powerful pulses. She uses these to bring Killmonger down to his knees! Choosing this Shuri costume for Halloween parties and comic book conventions is a great idea for any fan. Everyone who saw Black Panther will recognize you and enjoy recreating some fun scenes. Then, wear it again whenever it's time for Shuri to appear in future Marvel projects. Look around our site to find even more Black Panther, Marvel superhero and other products to match.